Feeling good! Emily Simpson revealed her amazing weight loss transformation after committing to a healthier lifestyle last year.The Real Housewives of Orange County star, 44, showed off her slimmer figure in a before and after photo on social media on Tuesday, November 10.- Advertisement – “I never wanted to show these photos publicly because I’m ashamed of where I let myself get, but here I am showing my transformation because I want to be transparent with you all,” Simpson, who had hip replacement surgery in October 2019, wrote via Instagram. “I worked my butt off to get here and I’m so proud of how far I’ve come and continue to go!”In the first photo, the reality star is wearing leggings and a tank top, showing off her pre-weight-loss body. She then posted a snap of herself now, in a black leotard that displayed a leaner physique. 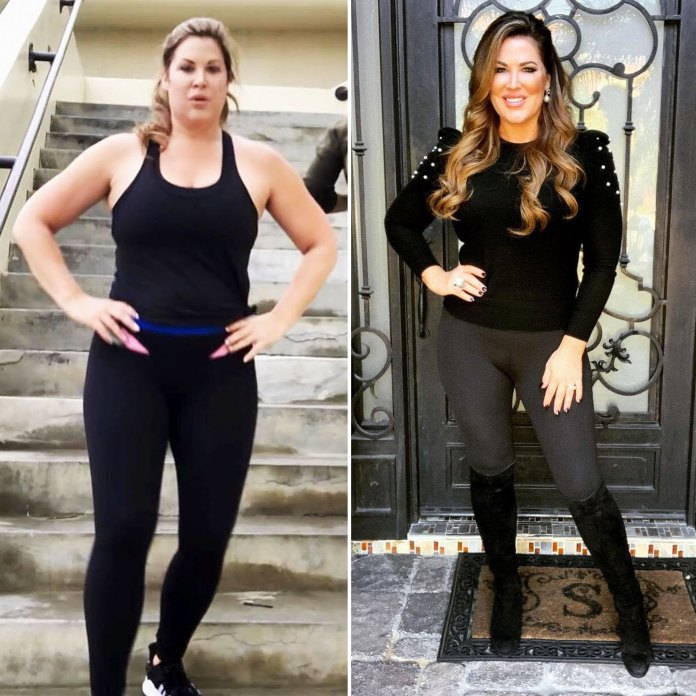 Courtesy Emily Simpson/Instagram (2)“I lost myself and my confidence through gaining 30 lbs. in one year in front of millions of people on a Reality TV Show,” she revealed. “Here I am a year and a half later feeling sexy, confident in my own skin, and like the EMILY I am meant to be!”- Advertisement – Last month, the Ohio native reflected on her health journey ahead of launching her new lifestyle website focused on recipes, fitness tips and training.“FINALLY feeling like myself again,” she wrote on Instagram. “It’s taken a year and a half of ups and downs but finally at 44 years old I’ve never felt more fit, healthy and in shape! And I’m implant free!”Simpson has shared her fitness goals and accomplishments with her fans over the past few years, revealing in June 2019 that she had enrolled in a 12-week fitness program and was down 10 pounds.- Advertisement – The Bravo personality pointed to her “severe” arthritis and becoming “really depressed” as catalysts for her lack of working out in the past.“It was painful to move, so I basically stopped moving at all. Not a great idea. I gained 20-25 pounds over the past year and added more unnecessary weight to my hip … which made it even harder to move and get around,” she explained at the time, noting that she joined forces with trainer Paulina Taylor Hefferan to get into shape.A year later, she said that starting her fitness journey was “the best decision” she’s ever made.“Not only have I lost significant body fat and several inches, but I’ve gained a newfound acceptance of my body,” Simpson wrote via Instagram in June. “I don’t weigh myself very often because the number on the scale doesn’t define me as a person nor is it wholly indicative of progress. I measure my progress and health by other methods of measurement such as endurance, strength.”She added: “I’ve changed physically but most importantly I’ve changed mentally. I’ve learned that weight loss doesn’t have to be all in or nothing, you just have to do 1 thing better than the day before. The key to long term results is consistency and having someone in your corner cheering you on!”Simpson pointed out that she’s had gains and losses but as of August, she’s lost 16 pounds and her body fat percentage is 10 percent lower than the year prior.“There’s no right way to start,” she wrote via social media. “There’s no magic plan or magic pill. You just have to dig deep and make yourself a priority.”Listen to Getting Real with the Housewives, your one-stop destination for Housewives news and exclusive interviews – Advertisement –