Lily Collins couldn’t help but praise the pics, commenting, “Wait, I love this and you!!! 🤣🤣🤣💖💖”Other A-listers chimed in as well. “YESSSSSS!!!!!!” commented Lisa Rinna, while The Kooples artistic direction, Tom Van Dorpe, noted, “Clearly inspired!” Agreed!After months of teasing a season 2, the streaming service announced on Wednesday, November 11, that it was renewing the series.- Advertisement – 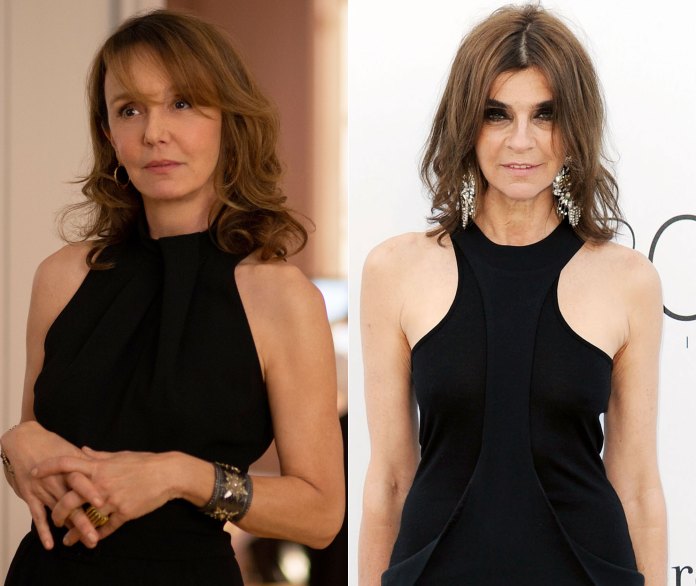 Left: Philippine Leroy-Beaulieu as Sylvie on “Emily in Paris.” Right: Carine Roitfeld. Carole Bethuel/Netflix; Joanne Davidson/ShutterstockToo funny! Carine Roitfeld pointed out some stylish similarities between her and Philippine Leroy-Beaulieu’s character Sylvie while watching Emily in Paris — and it’s so accurate.On Thursday, November 12, the 66-year-old fashion editor took to Instagram to share a series of side-by-side pics of she and Sylvie wearing a variety of ensembles that look a lot alike.- Advertisement – – Advertisement – “Who wore it best? 👀” Roitfeld wrote in the accompanying caption. “I had a bit of déjà vu while watching Sylvie in @emilyinparis and loved it.”Though none of the looks are identical, there definitely seems to be some inspiration pulled from the real-life fashion icon for the fictional one. Some of the most closely resembled looks include a black-and-white skirt-and-blouse ensemble, an off-the-shoulder black ballgown and halterneck number.Roitfeld concluded her post, writing, “Congrats @lilyjcollins and the team on returning for a second season!”- Advertisement – “Deux is better than un,” Collins wrote in an Instagram post after the news broke. “I’m freaking out and beyond thrilled (much to Sylvie’s dismay) to announce @EmilyinParis will be returning for Season 2! Thank you guys for the love and support and I hope you’re as excited as we are!!”As excited as many are to see the show return, the first season faced backlash for it’s depiction of French people and the main character’s extravagant lifestyle.“As disheartening as it sometimes is to read these things, it’s also a gift,” Collins told Vogue Arabia in her November 2020 cover story. “You’re being allowed to improve.”Listen on Spotify to Get Tressed With Us to get the details of every hair love affair in Hollywood, from the hits and misses on the red carpet to your favorite celebrities’ street style ‘dos (and don’ts!)